I mean sure, you've seen curling, the rock, paper, scissors championships — possibly even the great Redneck Games in Georgia. But we're going to take it to a whole 'nother level. Why? Because we can.

Well, that, and because it takes some serious guts…or just great peculiarity to pull off what these people do; and they need to be recognized for the freaks, er, champions that they are!

Without further ado, below are the world's greatest reigning stupendous unknown champions.

That's right. Forget charming the opposite sex. These guys and gals 'charm' worms – 567 to be exact. The number — gained in 2009 — set a new world record for the event.

The Worm Charming Championship is held in England every year and started in the 1960's as a fundraising event. Now hundreds of people dress up to entice worms out of the ground.

Leave it to the British to figure out a socially acceptable way to use the words 'entice' 'worm' and 'pitchfork' in the same sentence. 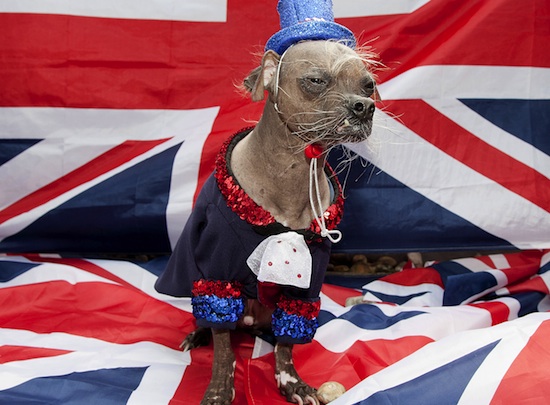 You know how most people kind of look like they're dog? Let's hope that's not the case with Bev Nicholson — owner of 'Mugly,' the 2012 winner of World's Ugliest Dog.

The competition is held in Petaluma, Calif. every year and the winner's owner gets $1,000 for having the world's ugliest dog. Again, the British own this title — if you couldn't tell from the British-clad 'mug' in the picture.

I'm not sure where the name 'Mugly' derives from, but from the looks of the picture, it could very well be a hybrid of 'masochist + ugly = Mugly.' Again, this dog is British – so based on their worm fetish, nothing would surprise me.

I'm sure he's a great cuddler. 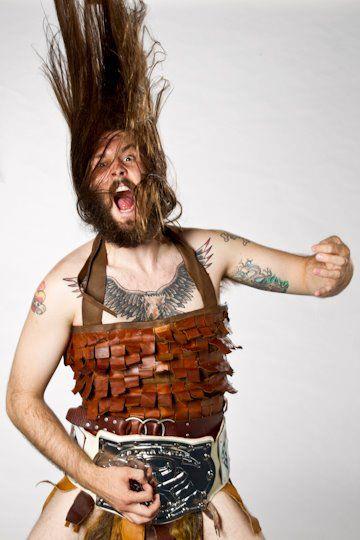 That's right. You actually can be a rock star without having a single talent. No singing, drumming or guitar skills here — you just to be able to 'air' it out. Just ask "Nordic Thunder." And good news: he's American! I think….he could be from another planet. I'm honestly not sure.

Below is his Facebook picture, where is status of last Friday read: "Leave for Denver tomorrow! Going to cheer on my little satanic reverse air guitar birthing Cannonballmavin at the Dark Horse, and then it's off to the Blue Bird on Saturday to defend the title! See you air heads in the Mile High!!!"

Not sure who Cannonballmavin is, but if "Nordic Thunder" is meeting cannons and balls, I think it might be best I keep my distance. Plus, I'm pretty sure "Nordic Thunder" isn't wearing any underwear in this picture. Anywho, if you do bump into him, ask him to air-guitar some Scorpions. I think he'd be fantastic. 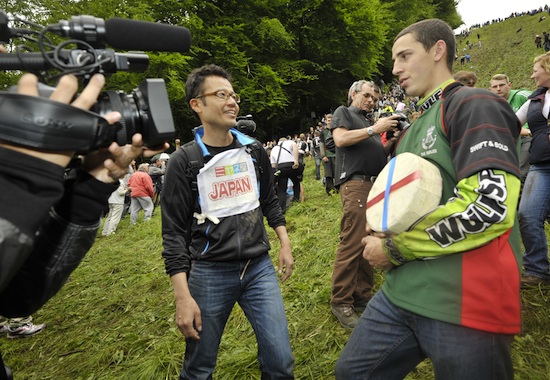 Back to those British!

Listen. I get it. We all love cheese. But not like they do at Coopers Hill in England.

Every spring for the past 600 years or so, a group of locals chase a 7-pound wheel of Double Gloucester — try pronouncing that — down an incredibly steep hill. Many people sprain ankles, break arms, get concussions — you name it — all while stumbling down the hill for the great prize: the cheese.

That's right. The first person down the hill wins the cheese; and for the past few years it's been Mr. Chris Anderson. Every. Time.

Chris might not seem like a 'looker,' but you can bet that as soon as he tells the ladies he's the Cooper's Hill Cheese Champion, the women swoon!

I get to use my inside sources on this one.

Started by a bunch of Michigan folk who transplanted to Los Angeles, and Joe himself, Monday Night 40's is a weekly competition during the NFL football season in which every participant must chug a 40 oz. beer of their choice, beginning at the kickoff of the second half of the Monday Night Football Game.

The only rule is that you must finish within 10 minutes without throwing up. Well, that, and when the Steelers are playing you must chug 40 oz. of Steel Reserve. Brutal. I know.

Sounds easy to you? In the history of the league — as of last year — only one female had finished within 10 minutes, and the best time for a rookie was 1:30. Only a few manly men ever crack the one minute mark.

Joe — He holds the all-time record at :22. Yup. twenty-two seconds. (This might have changed since last year — but I'm going with it!)

To give you some more perspective, it takes about :14 just to pour the beer out of the bottle.

Joe, you're a machine. A funnel-like weird boy beer-guzzling machine. It is my honor to know you.

This is so almost too good to be true that it seems like an urban legend. Politically incorrect? Absolutely.

If you do an extensive web search — like I have — you'll run into multiple articles claiming that 'midget' or 'dwarf' tossing has been outlawed in many states and most all bars because of the inhumane nature of the sport. However, a news clipping shows that 'Cuddles' — an 'oddball' from Britain — threw his human midget missile 'Lenny The Giant' more than 12 feet – defeating an Australian rival team.

And they outlawed this?? Shame.

The sport supposedly originated in Australia in the 1980's and became a popular bar attraction where 'dwarves' wore special padded clothing or Velcro costumes and were thrown onto mattresses or Velcro coated walls. Whomever throws the 'midget,' excuse me, 'dwarf,'… sorry… 'little person,' the furthest, wins.

Oh, and surprise! Cuddles and Lenny are… you guessed it… British! Man, those Brits know how to have a good time. 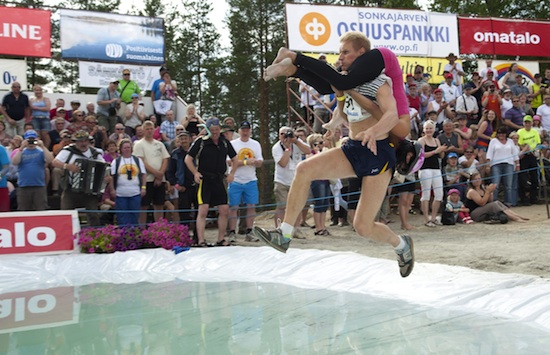 Taisto is an award-winning athlete from Finland. He's won the gold medal for Water Running…and oh ya, Wife Carrying.

Next time your wife complains that you don't carry your fair share — then pick her up and run to the hills just like Taisto!

Every year the competition is held in the Finnish village of Sonkajarvi, where a 250-meter track is filled with pits and obstacles meant to challenge each man and his load — I mean, lovely wife.

These 'championships' have gained popularity and have sprung up in Denmark, Latvia, Sweden, Estonia and South Korea. So look out U.S.A – we might soon have a reason to watch sports on TV again!

I call dibs on Taisto for my fantasy team though. Turns out Taisto has won the wife-carrying championship multiple times. Hear that fellas? Multiple.