America’s military is the biggest and most expensive in the world. It’s so big that it’s hard to wrap your mind around. Needless to say, there are a lot of moving parts, and sometimes those parts don’t run like they’re supposed to. For example, America’s military almost nuked North Carolina (on accident, of course).

And by “almost,” I mean, nuclear bombs were dropped on North Carolina. But by dumb luck, divine intervention, or whatever you’d prefer to call it, the bombs didn’t detonate. Very few people knew anything about this until the incident was declassified in 2013.

On January 24th, 1961 a B-52 Stratofortress was carrying two Mark 39 nuclear bombs. Each bomb was 3.8 megatons (which, to put into perspective, is about 250 times more destructive than the bombs we dropped on Hiroshima and Nagasaki). While the B-52 was flying around with the nukes onboard, it started to break up in mid-air and dropped the payload. The crew was ordered to eject from the plane, and five of the members survived the bailout, with three not surviving the evacuation.

You might be saying to yourself, “But there are a lot of fail-safes when it comes to nuclear bombs; how close were those bombs to going off?” Well, one of them came pretty near killing everyone in an eight mile radius. According to various articles, three of the four arming mechanisms on one of the bombs activated, causing it to execute many of the steps needed to arm itself, such as charging the firing capacitors and, critically, deployment of a 100-foot-diameter (30 m) retard parachute. The parachute allowed that bomb to hit the ground with little damage.

Note: If you are at all interested in the damage this would be done to your hometown, check out NukeMap. It’s a pretty sweet app that shows the destructive forces of these types of bombs.

So one of the bombs almost recreated the beginning of Terminator 2 in North Carolina. What about the other bomb?

Here is the Pentagon’s brief narrative of the incident:

During a B-52 airborne alert mission structural failure of the right wing resulted in two weapons separating from the aircraft during aircraft breakup at 2,000 – 10,000 feet altitude. One bomb parachute deployed and the weapon received little impact damage. The other bomb fell free and broke apart upon impact. No explosion occurred. Five of the eight crew members survived. A portion of one weapon, containing uranium, could not be recovered despite excavation in the waterlogged farmland to a depth of 50 feet. The Air Force subsequently purchased an easement requiring permission for anyone to dig there. There is no detectable radiation and no hazard in the area.

There you have it. One of the bombs almost blew up, and part of the other one is still in the ground. That is totally insane! I mean, I guess just leave it there. No need to go digging up uranium if you don’t have to.

This story seems creepy on so many levels. We were in the middle of the Cold War, so I get why we’d have a plane carrying around bombs. But the fact that no one knew how close the U.S. came to bombing itself is just scary. It’s an event that would have forever changed America had the bomb detonated. But instead, it’s a weird footnote in our nuclear story.

And how did Goldsboro commemorate this event? With a sign, of course: 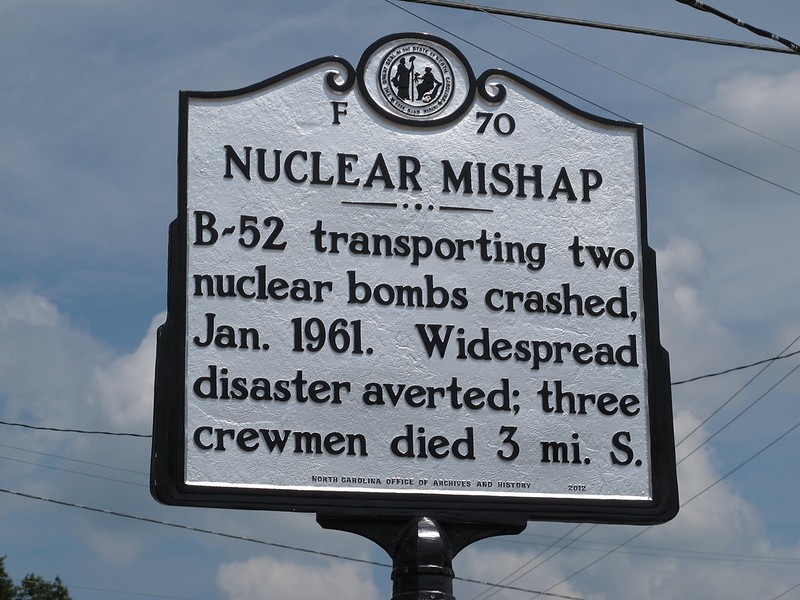 And now, onto a different type of atomic bomb: A Massively Amusing Collection of Atomic Wedgy Bombs for Your Heart’s Delight