Balotelli Has No Future with Manchester City After Horrific Tackle

Manchester City manager Roberto Mancini has called into question Mario Ballotelli's position with the club after a crucial 1 – 0 defeat against Arsenal which saw the striker being dealt a red card.

After Manchester United defeated QPR yesterday (April 8) City needed the victory at the Emirates Stadium in order to stand any chance of regaining their spot at the top of the league. However, this was not to be the case, as a goal from Arteta in the 86th minute seemingly sealed City's fate as Premiership runners-up, the final nail in the coffin in what has been a lacklustre few weeks for the Blues. 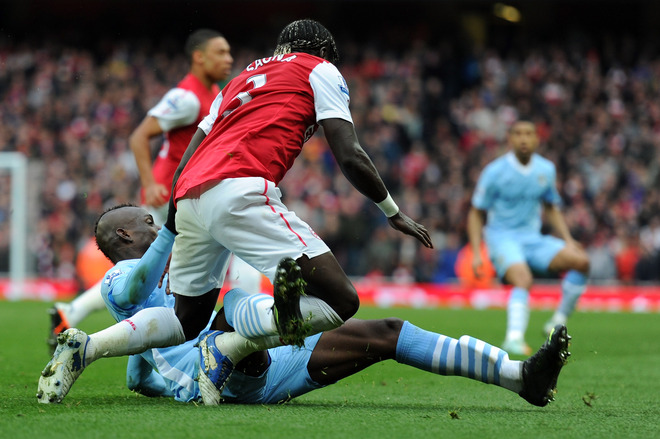 Unfortunately, Arteta's late goal wasn't the main talking point at the end of the match, as Balotelli yet again grabbed the headlines after a series of inexplicable and unforgivable challenges on both Bacary Sagna and Alex Song.

The striker's volatile nature is well-documented, but it seems that this time Mancini has finally stood up and taken notice, insisting that Balotelli "will not play" in City's next six matches and saying that he believes the Italian's actions should be punished by the Football Association.

When asked whether the FA should ban Balotelli, Mancini said:  “I hope so. From the bench I didn’t see but it was a bad tackle.” He also conceded that he would now "probably" look to sell the striker, saying: “I always defend him as he is a good guy, but if he does not change in the future he can lose all his talent."

Balotelli's horrific tackle on Song (viewable in shaky-cam in the above video) somehow went unpunished but, with the striker already having a yellow card to his name following a late challenge on Sagna, another challenge to the Arsenal full-back in the 90th minute saw the referee produce another yellow and send Balotelli back to the dressing room much to the chagrin of an irate Mancini, who will now undoubtedly see his future with the club brought into question.

“I hope, for him, that he can understand that he’s in a bad way for his future," Mancini added. "I hope he can change his behaviour in the future.

"He’s a fantastic player but at this moment, I’m very sorry as he continues to lose his quality.”

Arsenal's victory has now put them ahead of Spurs but 10 points behind City, who now trail rivals United by 8 points. United defeated QPR 2-0 thanks to a penalty from Rooney, who continues his impressive goal streak, and a goal from veteran Paul Scholes.